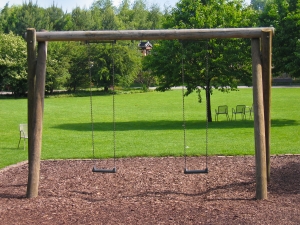 Have you ever wanted to do absolutely nothing: nothing real, nothing hard, nothing serious, at least not for a little while? Maybe lie down on the beach, read a good book, go play a round of miniature golf with your family and friends? Just be a little silly, just a little?

Remember when you were a kid, when you had the summer to yourself, to do what you wanted when you wanted with whoever you wanted? Just go find some friends and play: a game of basketball, or stickball, or maybe a game of manhunt; whatever you and your friends decided to do, however you agreed to do it. You and your friends would make up the game, and maybe the rules as you went. You’d try to be fair, make sure everyone had a shot, but still try to win. It might have been a long time ago but it still was memorable.

Well maybe all fun and games aren’t only fun and games after all. Maybe they’re a necessary part of life that can tell you a lot about a person and how they interact with others, how they handle complex social interactions, get along with people and convince them to participate in activities. Maybe, just maybe, they also can help you pick a jury. Yes, this is a law blog, and yes, everything has to get around to the law sooner or later; though it sure is fun to think of being 14 again with the whole summer in front of you.

While driving to work the other day I heard an interesting story on NPR’s Morning Edition. They were interviewing a Canadian researcher, a fellow by the name of Sergio Pellis. He was saying how important recess is to children; that countries that have more recess usually have students that perform better academically than those with less. It was more than just that, though: free play is what’s important, and the reasons were fascinating.

When kids play together, without supervision, no adults or umpires or coaches around, they have to do a whole lot, on their own, to have a little fun. They have to make the rules so that everyone wants to, and can, play. They have to convince the other kids to play. Then they have to go out and play, actually laugh and run around and do whatever they decided to do, together, as a team, a sort of group effort. According to Mr. Pellis, his research showed what a good thing all of this free play is for children. Being a scientist in the 21st century there was of course talk about neurons, and wiring, and specific parts of the brain, such as the prefrontal cortex. The research showed how the parts of the brain that controlled executive function, which is a fancy way of saying self-control, planning, and what most adults would probably call maturity, changed, for the better, with free play. His research also showed, according to the report, that recess might be almost as important as academics to academic success. Can’t you hear the kids in the classroom, bored half to tears, stand up and give a resounding cheer? Anyone doubt that? Anyone? Anyone? Buehler? Buehler?

There’s another story to this, too: adults also need to play; just play; be in the moment; have a little fun, with family and friends. Go for a bike ride, join a club, play ball, a little dimpled round one, a big striped brown or orange one, or even a little green tennis ball that you can make bend and sweep from the mound like Seaver. It builds camaraderie, helps stop you from being a dull person, and keeps life, and its responsibilities, from being such a drag. This was all according to the second story I heard this week on NPR’s Morning Edition. Listen to the news, and learn about play. Who knew?

Now enough about the reminiscing. Life is nothing but a series of trials separated by down time. At least, that’s what a lovable trial attorney would say, if there actually was such a person. Every trial attorney has asked the routine question while trying to pick a jury about what the potential juror does for fun, what her hobbies are, what television shows she likes to watch. It’s all very routine and sometimes is just said so you have something to say and you can make the people in the room believe you care about them when all you really want to do is get a bunch of fair-minded people who won’t hate your client seated in the jury as quickly as possible so you can go finish preparing what surely will be your awe-inspiring opening.

But what if you could actually gain some real insights? Ask a person not only what they do for fun now but what they remember doing as a child growing up? What if you could elicit some details about their free play, as the researchers call it? And what if they actually do things for fun even now, instead of letting their daily grind grind them down? Could that help you pick a juror who knows how to navigate through a sea of unfamiliar people, through a new kind of game where everyone is free to make the rules as they go along, and where the key is to convince everyone to participate and come to some sort of intelligent, joint solution?

After all, isn’t that really what a jury does? The court gives them the substantive law, what they have to decide. But it really doesn’t tell them how to do it; the procedural niceties are pretty much up to them. Who talks, when they vote, do they vote first and then talk and try to convince each other, or do they each say what they want and then vote for the first time. When they inevitably disagree, do they give each other deference, respect their opinion and try to convince them to change their mind from there, or do they try to browbeat them? Sounds like kids on the playground making up the rules as they go along. Like the scene from the Raiders of the Lost Ark as Henry Jones Jr., yes, the man, not the dog, is about to save the world and he’s asked what the plan is: I don’t know; I’m making it up as I go.

Anyway, it’s just an idea. The good ones seem to come from unexpected places. A few days ago someone near and dear to me asked me what I did for fun. The next time you hear that question maybe you should think long and hard about the answer. After all, it might tell you more than you realize.