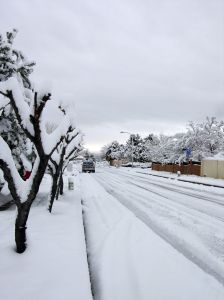 Everyone might think they know what a collapse is. Everyone probably says they know a collapse when they see it. Most New York businesses and homeowners have policies of property insurance to protect them and their property from major, and sometimes minor, damage. But has anyone ever really taken the time to figure out whether a collapse is actually covered under their policy of property insurance? Even if the policy states that it provides additional coverage for collapse, whether or not the policyholder will be able to recover depends, in large part, on the definition of collapse.

There have been a number of major collapses in the news recently. There have been crane collapses in New York City. The blizzard of February 8-February 9, 2013, aka winter storm Nemo, dumped more than two and one half feet of snow on many parts of eastern Long Island. As a result, the roof of a local bowling alley in Smithtown, New York collapsed, and the nearby Smithhaven Mall was evacuated because authorities feared the roof would collapse when large amounts of water gushed through the ceiling of multiple stores within it.

The two recent incidents on Long Island point out the key aspects of what constitutes a collapse under New York law and whether a policy of property insurance will provide coverage for it when it occurs. To be clear, we are talking about a specific type of claim: A first party property claim. This is one in which the policyholder, which is normally the business owner or the homeowner, makes a claim to recover for what they allege is damage that occurred as a result of a loss for which the policy provides coverage; i.e., they try to recover under their own policy of insurance.

Under New York law, there are two definitions of collapse. The first is the significant impairment of the structural integrity of a building or part of a building. This means that a building or part of a building does not have to fall down, fall in, or be nearly destroyed in order to collapse; it can just be in imminent danger of doing so. See Royal Indem. Co. v. Grunberg, 155 A.D.2d 187, 553 N.Y.S.2d 527(3rd Dept. 1990). This seems to be the view of the majority of courts and jurisdictions across the country.

Which rule or standard applies depends in large part on where in New York the loss occurs. The two different tests were decided by two different appellate courts which govern two different sections of the state. There has not been a definitive ruling by the New York Court of Appeals, as to what the ultimate rule is throughout New York. There are four appellate division departments within New York. Graffeo, supra, was decided by the Appellate Division, Second Department; it has not been overturned and it is still good law within in the Second Department. Royal Indem. Co. v. Grunberg, supra, was decided in the Appellate Division Third Department and is still good law within the Third Department.

The collapse of the bowling alley’s roof in Smithtown, would probably meet either definition of collapse. A big part of its roof, approximately one fifth, actually fell in; it was not merely in imminent danger of falling in. The ceiling fell in and other debris, as well as snow and water, fell on the floor. The damage will force it to close for months; according news reports, it is looking to re-open sometime in late summer or early fall. To just about anyone who saw this, a large commercial building with a gaping hole in the middle of its roof, it is a collapse.

The problem at the Smithhaven Mall, however, is not so clear cut. Based on the limited information supplied by the news reports, it appears that it would not meet the test for a collapse set out in Graffeo, supra. The roof did not fall in and the structural walls did not fall down. Evidently, no one could look up through the ceiling and see the sky or look out through the walls and see the parking lot. It could, conceivably, meet the test for imminent collapse set out in Grunberg, supra. Reportedly, there were snow drifts seven feet high on the roof of the mall and torrents of water did pour through certain sections of the ceiling. If the roof deflected or the structural walls bowed, it might have been in imminent danger of collapse. The part of the state in which the mall is located, Suffolk County, New York, however, is in the Second Department, which is the same appellate division in which Graffeo, supra, was decided. So, even if it was in imminent danger of collapse, that still may not be sufficient to constitute a collapse.

There are many things that business owners, insurance carriers and their adjusters need to be aware of that they normally might take for granted. What actually constitutes a collapse is one of them. This is made even more important by the weather in this part of the world, which can produce a hurricane in October, a snowstorm a week later in November, and then thirty plus inches of snow in approximately 14 hours in February. With weather like that, collapse is a word with which we should all become familiar.