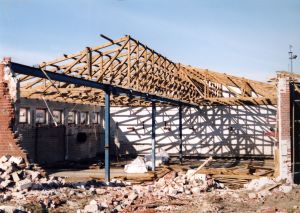 We have been discussing what records a New York Business should keep on file when it is faced with litigation: Records that are relevant to whether it should win or lose the dispute, and any records that could lead to such evidence. We also have spoken briefly about the different penalties that can be imposed for failing to preserve those records. For the most part, they consist of making it harder to win the dispute once a lawsuit has been commenced. Now we are going to analyze the legal requirements for imposing sanctions on the party that fails to save relevant evidence when it has a duty to preserve the evidence.

This may seem like an esoteric discussion, without implication to the typical New York business. There are, however, myriad examples of businesses being penalized for transgressions involving the loss of evidence. They range from the bad faith destruction of evidence (e.g., the accounting firm Arthur Andersen, which reportedly destroyed, over the course of weeks, multiple boxes of documents relevant to an investigation of Enron, and, as a result, lost such a large portion of its business that it had to lay off approximately 85,000 people); to evidence being discarded due to a business’ gross disregard of its obligation to preserve it; to documents being carelessly discarded due to a business not carefully following its attorney’s instructions to save them (see Zubulake v. UBS Warburg LLC, 229 F.R.D. 422 (S.D.N.Y. 2004). Knowing the rules, the possible penalties, and the tests for imposing them, therefore, is an important lesson every New York business should learn in order to avoid such costly mistakes.

Spoliation is usually penalized during the litigation itself, with penalties that are intended to level the playing field; i.e., to try to ensure that the party that should have preserved the evidence does not gain an unfair advantage by depriving its opponent of the opportunity to use the evidence. The party that is deprived of the evidence (the “Injured Party”) is the one that asks the court to sanction the party that “lost” the evidence (the “Spoliator”). In order to penalize a party for Spoliation, however, the offending party must have had control over the evidence and a duty to preserve it at the time it was lost or destroyed. That is, if a party had a record or document, but did not have to keep it, then the party cannot be penalized for discarding it. The party must have lost or destroyed the document with a culpable state of mind: It could have deliberately destroyed the document to keep it from being used in the dispute; it could have failed even to try to save the document after it knew the document should be kept; or it could have negligently discarded the document. Finally, the missing evidence must be relevant to the party’s claim or defense, which means at the time of trial it reasonably could have been used to help decide who should win the dispute. See VOOM HD Holdings LLC v. EchoStar Satellite L.L.C., 93 A.D.3d 33 (1st Dept.2012); Zubulake v. UBS Warburg LLC, 220 F.R.D. 212, 220 (S.D.N.Y. 2003); and Gaffield v. Wal-Mart Stores E., LP, 616 F. Supp. 2d 329, 337 (N.D.N.Y. 2009).

Once the Injured Party has met the test for imposing sanctions for Spoliation of evidence, the penalty will depend, to a large extent, on the circumstances under which the Spoliator failed to preserve the evidence. Though courts normally have a large amount of discretion in deciding which penalties to impose, the drastic remedy of striking a pleading, which has the effect of granting a default judgement to the Injured Party, is normally reserved for a Spoliator that acted in bad faith by deliberately destroying relevant evidence to prevent its opponent from using the evidence in the litigation. See Sage Realty Corp. v. Proskauer Rose LLP, 275 A.D.2d 11, 17-18 (1st Dept. 2000). See also Hyosung (Am.), Inc. v. Woodcrest Fabrics, Inc.,106 A.D.2d 298, 299 (1st Dept. 1984). Absent such willfulness, lesser sanctions, including the imposition of an adverse inference charge at trial, or forcing the Spoliator to pay the costs of obtaining replacement evidence, still can be imposed.

There are many more avenues to explore regarding this seemingly simply subject; we have only scratched the surface. Those, however, will be pursued in subsequent posts.